The research group Applied Systems Biology is concerned with the mathematical modeling and computer simulation of infection processes caused by human-pathogenic fungi. The spatio-temporal data basis for these models is acquired by automatizing the data analysis of microscopy images on infection processes for high-throughput scanning. Our aim is to unravel secrets of the dynamical, functional and morphological aspects of the host-pathogen interaction using approaches of image-based systems biology.

Image-based Systems Biology seeks to take full advantage of the information contained in images and includes the following three steps:

During recent years, we have implemented a variety of software tools supporting the various steps, e.g. including the following software tools:

Image-based systems biology represents a generic link between experiment and theory in interdisciplinary studies and offers an enormous range of opportunities for cooperation, since microscopic and spectroscopic data are routinely collected in nowadays experiments. This explains why the research group Applied Systems Biology is an active collaboration partner in the BMBF-funded Center for Sepsis Control and Care at the Jena University Hospital as well as in two DFG-funded collaborative research centers in Jena: FungiNet 124 – “Pathogenic fungi and their human host – networks of interaction” (Project B4) and PolyTarget 1278 – “Polymer-based nanoparticle libraries for targeted anti-inflammatory strategies” (Project Z01). In the newly established Excellence Cluster – “Balance of the Microverse” at the Friedrich Schiller University Jena, Prof. Figge is coordinator of the research area on “Data Synopsis” as well as a member in the interdisciplinary management board of the “Microverse Imaging Center”. Furthermore, Prof. Figge is the speaker of the Leibniz-funded ScienceCampus InfectoOptics, which is a collaborative initiative where researchers from the life sciences and optics/photonics closely work together with the aim of investigating and combating infectious diseases by means of novel optical technologies. In the Research Campus InfectoGnostics, methods for application in the diagnosis of infections are being further developed; for example, in the ADA project, where a platform for screening for Staphylococcus aureus / MRSA in human and veterinary medicine is being developed.

Last but not least, the research concept is further supported by the lectures on Image-based Systems Biology and Systems Biology of Immunology to educate bachelor and master students in this modern research approach and to teach the basics of analytical and quantitative methods for modeling dynamic systems.

Taken together, the research group Applied Systems Biology is a link between the two profile lines LIGHT and LIFE of the Friedrich Schiller University Jena. This is also reflected by Prof. Figge’s membership in the faculties of the Jena School for Microbial Communication, the International Leibniz Research School for Microbial and Biomolecular Interactions, as well as the Jena Center for Soft Matter and the Michael Stifel Center Jena.

Hyphal growth segmentation Hyphal growth is the driving force of fungal bloodstream infections due to their ability to pierce through epithelial tissue. Investigating the growth of a hypha via image analysis is often hindered by crossing or touching hyphae from different fungal branches and the quality of the image. The 3D-HyTracer can, to some extent, […] 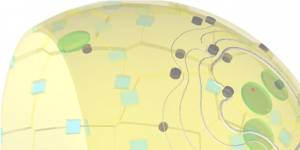 A. fumigatus infection in virtual alveolus

In this project, a virtual infection with A. fumigatus in human or murine alveolus is simulated. The corresponding model considers a realistic to-scale representation of the alveolus, consisting of a 3⁄4 sphere, with alveolar epithelial cells (AEC) of type 1 and 2 as well as pores of Kohn (PoK). Moreover, the AEC, on which a conidium is […] 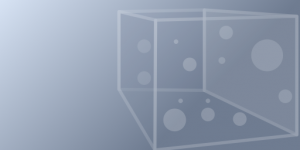 The agent-based modelling framework is able to capture spatio-temporal dynamics of processes in pathogen-host interactions in the human system. This approach provides a variety of possibilities, as it can represent the specific morphology of cells as well as their migration and interactions within a defined environment. Although ABMs are very flexible and can be used for almost […]

Replacing labelling techniques with improved, label-free image processing Host-pathogen interactions are ideally studied by imaging confrontation assays, where interacting cell types are monitored during and/or after their interaction. The resulting images are quantified via automated segmentation and classification algorithms, which help to unravel biological functions from host-pathogen interactions. While the segmentation of fluorescently labeled cells […] 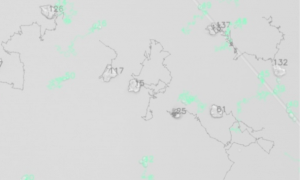 The algorithm for migration and interaction tracking (AMIT) framework enables a high-performance analysis based on a machine-oriented programming implementation in C++.The high-throughput analysis is designed in particular for time-resolved microscopy data, where processing itself can be parallized depending on the available hardware. The output of AMIT can then be used for a wide variety of quantitative analyses using a […] 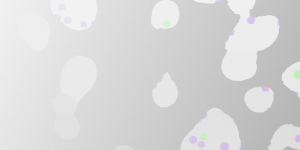 The first line of defense against the airborne human-pathogenic fungus A. fumigatus are the resident immune cells in the human lung – the alveolar macrophages. A. fumigatus conidia have to be cleared from the lung before onset of germination, which occurs approximately six hours after entry in the lung. Thus, understanding the host-pathogen interaction between A. fumigatus and macrophages is an […] 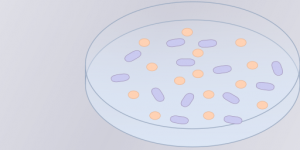 Co-infection of wounds with more than one pathogen are frequently observed in the clinical setting and are often more difficult to treat and come along with increased antibiotic resistance. However, the nature of the interaction between multiple pathogens can be manifold and are for many pathogens not yet understood. Two bacterial pathogens that are often […] 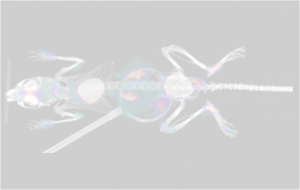 In this study we aimed to develop sensitive methods to quantify early pathological changes of the bones in a preclinical model of rheumatoid arthritis. Such methods are key to diagnose the disease in an early stage as well as to monitor treatment efficacy. We provide two measures that can be calculated from in vivo micro-CT images in […] 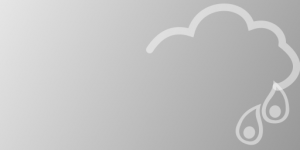 Confrontation and phagocytosis assays are commonly used to investigate host-pathogen interactions of certain immune cells such as phagoytes like macrophages or neutrophils and various pathogens. Such experimental assays usually have to be analyzed using automated image analysis. From the resulting quantitave measures such as the number of phagocytosed or adherent pathogens and phagocytosing immune cells various […] 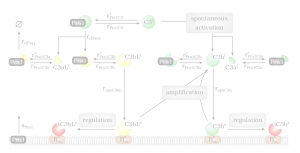 In this study we analyze the the immune evasive pathogen C. albicans. The secreted pH regulated antigen 1 (Pra1) is a protease and cleaves C3, the key molecule for cell opsonization. The paradox of this mechanism is that this cleavage of C3 produces a molecule that is very similar to the opsonin C3b. At a first […] 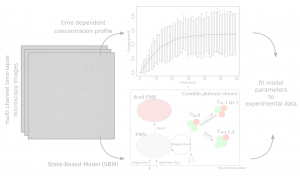 In this study we derived a framework to analyze confrontation assays by an image based systems biology approach. Experimental Data Confrontations assays were performed with Candida glabrata and neutrophils. Time-resolved microscopy data were collected during the whole duration of the experiment. Experimental collaborators Fungal Septomics group at the Leibniz-HKI in Jena, Germany Image Analysis Experimental data sets were quantified and […]

DeconvTest is a Python-based simulation framework that allows the user to quantify and compare the performance of different deconvolution methods. The framework integrates all components needed for such quantitative comparison and consists of three main modules: (1) in silico microscopy, (2) deconvolution, and (3) performance quantification. Deconvolution itslelf is an essential step of image processing […] 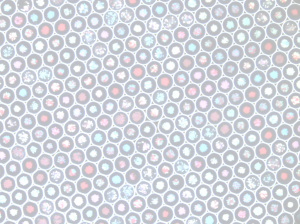 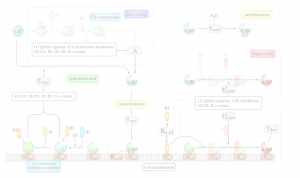 The DynaCoSys model is a hybrid differential equation model that describes the complement activation of the alternative pathway. The dynamics of the surface bound molecules are described by a set of ordinary equations and the dynamics of the key fluid phase molecules are described by partial differential equations. The non-linear model includes all features of […] 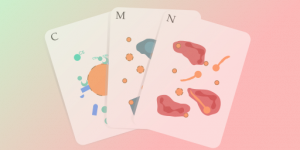 In this study we investigated the counterplay between the infection – caused by microbes – as well as the inflammation – induced by the immune system. Therefore we chose the example organism Aspergillus fumigatus. The ubiquitous spores (conidia) of this fungus are spread over the air. Thereby several thousand conidia are inhaled every day by every […] 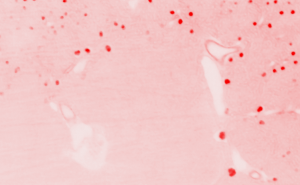 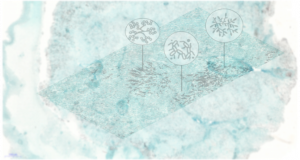 Experimental data If the human immune system is weakened, fungal infections can lead to a life-threatening condition in humans. In order to determine the type of fungus, the pathologist has to cut out a piece of tissue from the organ to be examined. The diagnosis is based on manually inspection of histologically stained tissue slices. […] 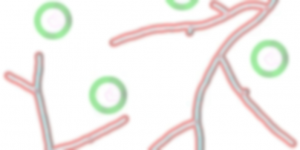 In this project, the growth of fungal hyphae is modeled. As a parameterized approach, different hyphal structures can be learned, simulated and reproduced for further analysis or applications. The algorithm is implemented as a recursive approach, which allows to potentially grow a new hyphal branch at each depth level. The angle of curvature, frequency of […] 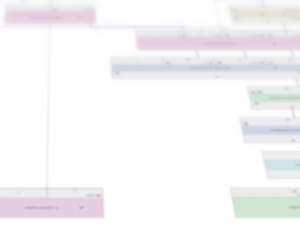 Developing image analysis pipelines without programming ImageJ is a powerful tool for image analysis that is easy to learn and can be extended with hundreds of plugins. Creating a batch processing pipeline on the other hand requires programming knowledge in langauges like ImageJ macros or Python, as well as extensive amounts of additional code for handling […] 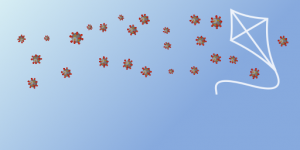 Epidemiological modelling of infection spread in child care facilities During the global COVID-19 pandemic, numerous measures were taken to mitigate the spread of infection. Among these was the closure of childcare centers since non-pharmaceutical interventions like social distancing or mask-wearing are not applicable to preschool children. However, this has led to extensive negative effects, such […]

In this project we aimed to develop a toolkit for automated and objective analysis of multispectral optoacoustic tomography (MSOT) image data. Experimental Collaborators Center for Sepsis Control and Care and Department of Anesthesiology and Intensive Care Medicine at the University Hospital in Jena, Germany Current quantitative analysis methods of MSOT images are based on extracting signal intensities from […] 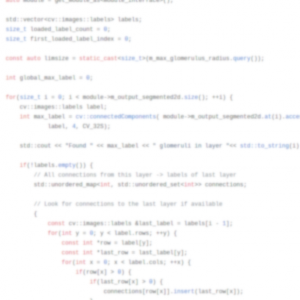 High-performance image analysis in C++ MISA++ (Modular Image Stack Analysis for C++) combines the high efficiency of C++ with the user-friendliness of ImageJ with the option to extend its usage beyond image analysis. The framework consists of a high-performance C++ library and a standardized ImageJ plugin that provides a graphical user interface for any application built with our framework. […] 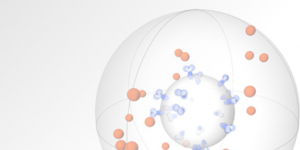 Model for antigen binding by B cell-derived receptors

In this study we investigate receptor–ligand binding in the context of antibody–antigen binding. We established a quantitative mapping between macroscopic binding rates of a deterministic differential equation model and their microscopic equivalents as obtained from simulating the spatiotemporal binding kinetics by a stochastic agent-based model. Furthermore, various properties of B cell-derived receptors like their dimensionality […] 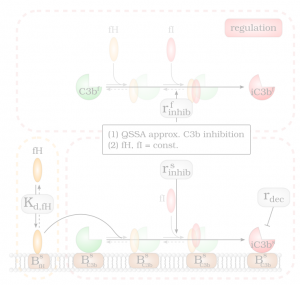 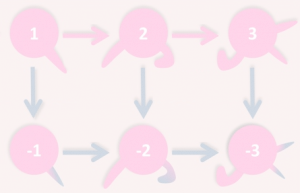 Candida albicans is an opportunistic fungal pathogen of the human mucosal flora and can cause severe invasive infections in immunocompromised patients. The yeast to hypha transition and invasion of host-tissue represent major virulence factor and resembles the switch from benign colonizer to an invasive pathogen. A comprehensive understanding of the infection process requires analyses at the […] 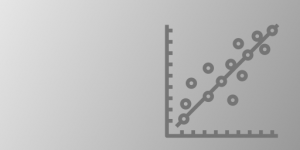 The ODE/SBM parameter estimator is a framework for simulating, estimating, and screening ordinary differential equations (ODEs) or state-based models (SBMs) concerning particular parameter values. The framework is implemented in C++ and allows the user to choose between different solvers for estimation and time-integration depending on the chosen model. 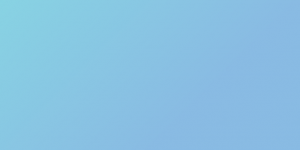 Mixture model for cluster segmentation To help alleviate the problem of segmenting clusters of near-identical objects, we developed the TREM algorithm. This is a probabilistic template matching algorithm that fits a Gaussian-shaped, not necessarily circular, object to best fit the localization of objects in the cluster. This is done using an adapted version of the […] 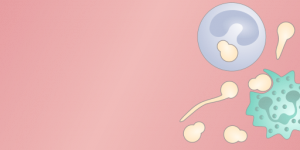 Experiments – Whole blood infection assays In the wet lab whole blood experiments are performed where blood samples from healthy donors or immunocompromised individuals are infected with various pathogens such as the human-pathogenic fungi Candida albicans and Candida glabrata or the bacterial pathogen Staphylococcus aureus. With the aid of FACS analysis and survival assays temporal dynamics of the host-pathogen interplay […]