In this study we investigated the counterplay between the infection – caused by microbes – as well as the inflammation – induced by the immune system. Therefore we chose the example organism Aspergillus fumigatus. The ubiquitous spores (conidia) of this fungus are spread over the air. Thereby several thousand conidia are inhaled every day by every human being. Due to their small size they are able to reach the lung alveoli, where they have to be eliminated by the immune system before the infection onset. In immunocompromised patients this process is often impaired. Therefore aspergillosis can develop, which is associated with high mortality rates of approximately 30 – 90 %. We investigated the role of different immune cells during the infection with A. fumigatus by using the mathematical approach of evolutionary games on graphs (see figure below).

The smallest units of the lung are the alveoli that are organized in so called alveolar sacs – the next higher structural unit. Infection-inflammation processes are modeled for one alveolar sac consisting of approximately 21 alveoli. A pseudo-spatial resolution is realized by an interaction graph that is drawn between conidia within the same and neighboring alveoli according to specific rules.

In evolutionary game theory a population of individuals, here A. fumigatus, is simulated. Under the pressure of the immune system they pursue different strategies. In order to account for different temporal components of the immune system, like the complement system, alveolar macrophages, and PMN (polymorphonuclear neutrophils), we constructed three consecutive games, where each game comprises the main processes of the immune response to A. fumigatus. These games are coupled by infection- and inflammation signals (see figure below)

Games simulate the immune response on different temporal scales and are interconnected by inflammation and infection signals: 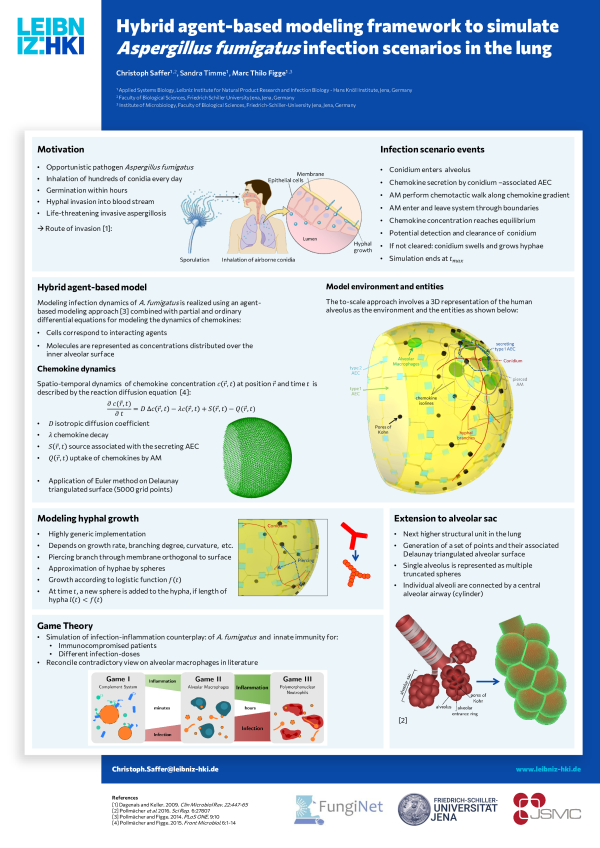 Hybrid agent-based modeling framework to simulate A. fumigatus infection scenario in the lung