Candida albicans is an opportunistic fungal pathogen of the human mucosal flora and can cause severe invasive infections in immunocompromised patients. The yeast to hypha transition and invasion of host-tissue represent major virulence factor and resembles the switch from benign colonizer to an invasive pathogen. A comprehensive understanding of the infection process requires analyses at the quantitative level. An image-based systems biology approach, combining image analysis and mathematical modeling, was applied to quantify the kinetics of hyphae development, hyphal elongation, and epithelial invasion.

Candida albicans cells were grown on epithelial cells for six hours. During the whole time course flourescence microscopy images were taken and differential staining was performed allowing the discrimination of invasive and non-invasive hyphal segments.

Segmentation of yeast and hyphal cells have been performed as well as classification of hyphal segments into invasive and non-invasive parts for all experimental time points. 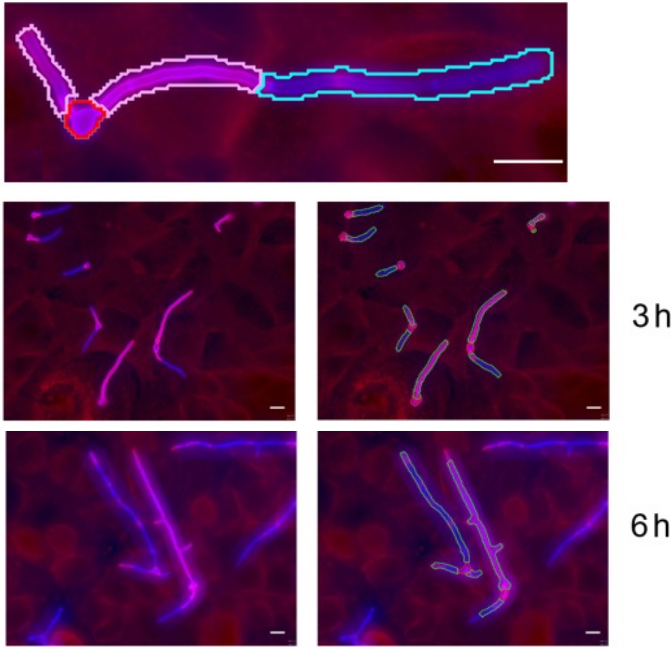 Overview of segmentation and classification of C. albicans cells by automated image analysis. Scale bars correspond to the length of 10 µm. The image was separated into ROI and the background and white borders indicates the classification of the ROI as a C. albicans cell. The filamentous cells wer classified into yeast cells (red border) and its hyphae (green border). Furthermore, hyphae were divided into invaded (blue) and non-invaded (pink) segments.

To better understand the infection process we developed two mathematical models’– a kinetic growth model and a kinetic transition model – that were developed using differential equations.

Using the kinetic transition model we quantified the route of invasion in the state space of non-invasive and invasive fungal cells depending on their number of hyphae. The results showed that the initiation of hyphae formation represents an ultimate commitment to invasive growth and, thus, suggests that in vivo, the yeast to hyphae transition must be under tight negative regulation to avoid the transition from commensal to pathogen invading the epithelium.